One of my biggest #bucketlist wishes is finally happening: sleeping in the Sahara.

Arrival in Merzouga
We arrived to Merzouga late afternoon at the so called base camp, from where we started to get ready to head into the Sahara. The small village of Merzouga is situated in southeastern Morocco right next to the Sahara and the border with Algeria is no further away than 50km. It literally feels like the middle of nowhere, but in a good way!

Say bye to luxury
In the base camp we had to leave behind all our luggage (2 big suitcases, 2 carry-ons) and we transformed ourselves into the ‘real’ kind of traveller. With a backpack. That must have been the first time ever. We tried to convince our guide to bring our carry-on luggage on the camel, but he laughed at us and told us it was impossible. We did insist on keeping our normal outfits on. Because you know, #travelinstyle.

Meeting our camel friends
Around 6pm it was time to meet our camels for the first time! I know I should call them by the name of ‘dromedary’ because of the fact they only have 1 hump instead of 2, but camel seems the more common word of choice. I was happy to see the camels were treated well and seemed to have a real bond with their care takers. First of all: getting on a camel AND staying on it while the camels plummet down into the soft sand while walking is not that easy. The trick was even harder for Tatiane, who had to maintain her balancing game while also photographing. So kudo’s to her for the photos as seen below of which some have been taken while riding!

I’m probably going to sound like a lame ass animal lover (which I am, by the way), but camels are so easy to sense a form of communication with! When you’re nervous, they seem to get nervous too. When you’re calm, they are too. Yep, yep, some real bonding going on there. But for real: camels are cool. Each of them really seems to have their own personality.

The Nomad camp
When we arrived at the camp, the sunset was already in progress, so without wasting too much time we started walking up on the highest dune we could find. Ofcourse after dropping off our backpacks in our tent! You can’t imagine how tiring it is to walk up a super steep hill when your feet keep plummet down in the sand. Around 20 minutes and 3 breaks along the way later, we finally made it all the way up. The next 1.5 hour is hard to put in words, simply because it has to be felt. The solitude and silence you experience in the Sahara is like no place I’ve ever been to. It’s incomparable. I’ve seen so many insanely beautiful places over the course of the last few years, but this one is one of the few that really captured my heart in a way no other did.

Sitting in the Sahara looking out over a sea of dunes, seeing nothing but red sand and silence felt like such a milestone moment. I guess that we suddenly realized as a team and as friends how far we’ve come in a year. For years I’ve been wondering what it would feel like if I were living the life of my dreams and that very moment I realized: this is it. We did it. We struggled. We worked so hard. But from here it’s only going up.

Life at the camp
The rest of that night and the next morning was equally magical and fun. When we finally made it back down to our camp, we made friends with a lovely couple from Spain with who we spend the next few hours chatting around mint tea, sharing stories and eating a traditional Moroccan dinner. We went star gazing. We played drums with the locals. We sang. I tripped over an unknown object on the floor, ripping open my toe. Our nomad family helped me treat the cut the local way: stopping the bleeding with red pepper and fabric tied around the toe. We left food for the desert foxes and stayed at a distance to watch it come eat. We chatted until we could no longer keep our eyes open.

Goodmorning
The first time since ever that I didn’t mind waking up at 5am, even though that meant I only had 3 hours of sleep. We woke up in the middle of the night of a cat meowing IN our tent (the noise freaked us out) and it was hard to fall back asleep. Watching the sun come up and the day begin was beautiful. The soft morning light over the red sand transforms the view in something completely different than the sunset we experienced the night before. After soaking up the new day, it was time to start our camel ride back to the base camp.

Nothing but gratitude for this unforgettable, magical experience. Thank you, Sahara desert crew for hosting us.

Ps. How Dora the explorer do we look in the first photo with our backpack? LOL 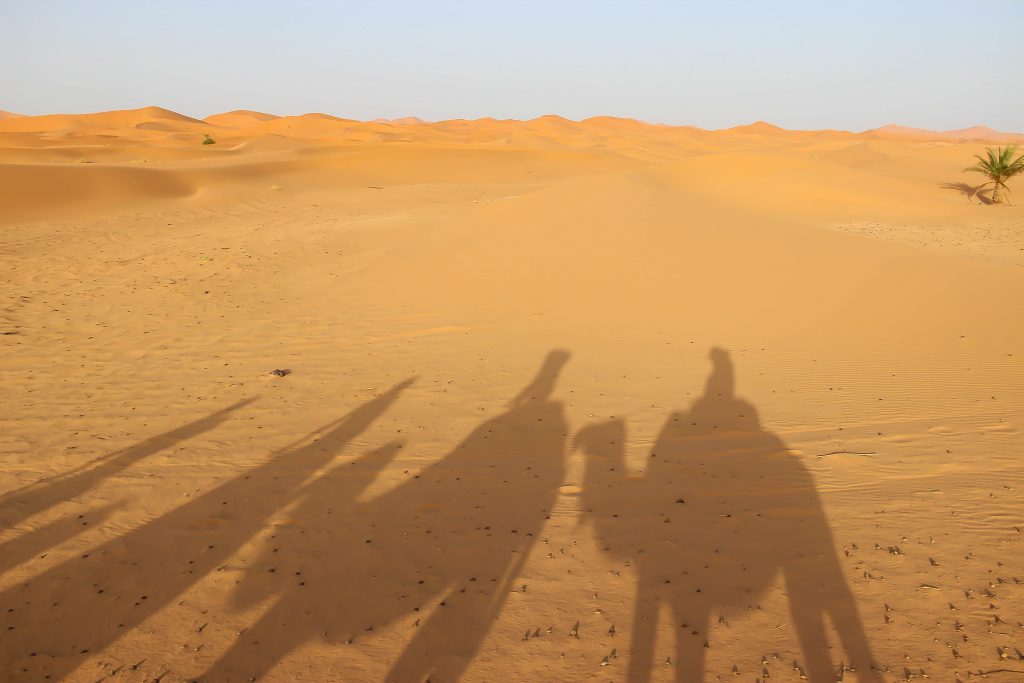 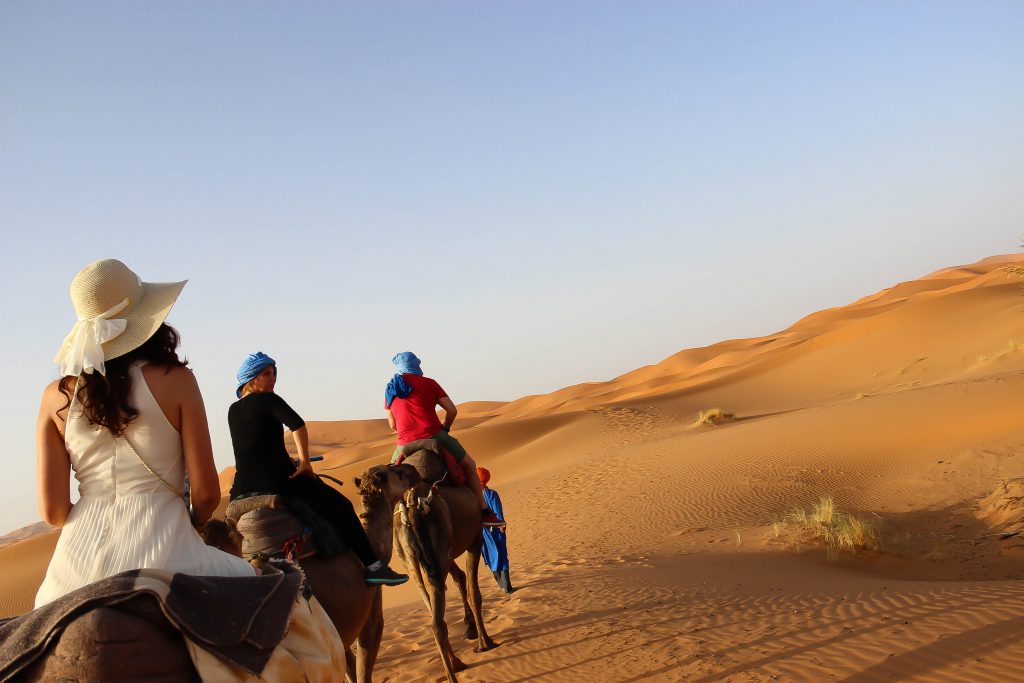 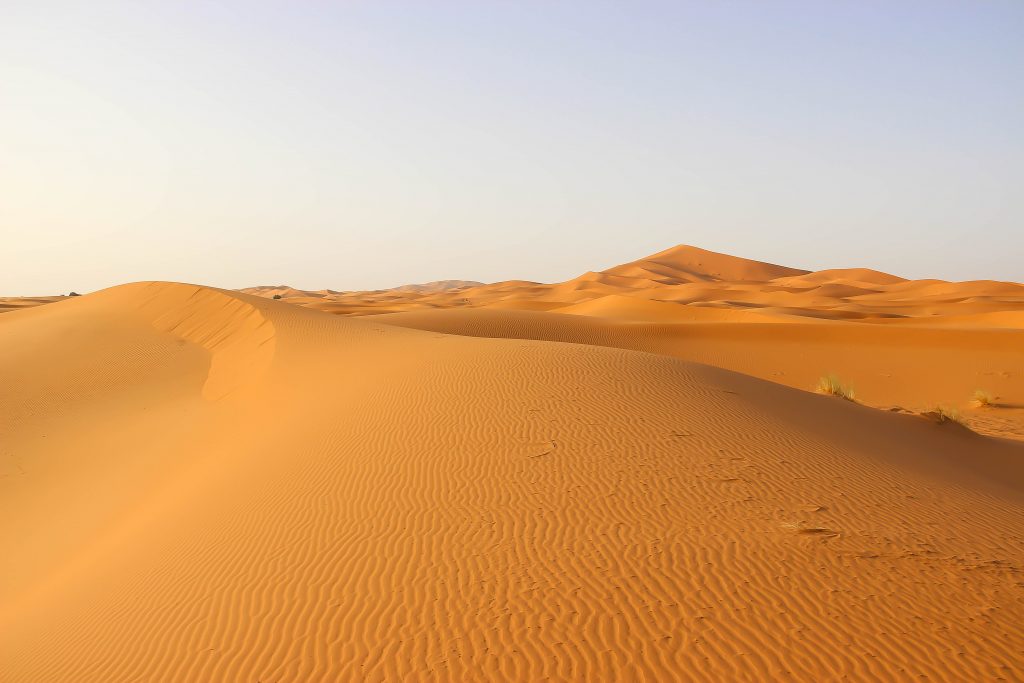 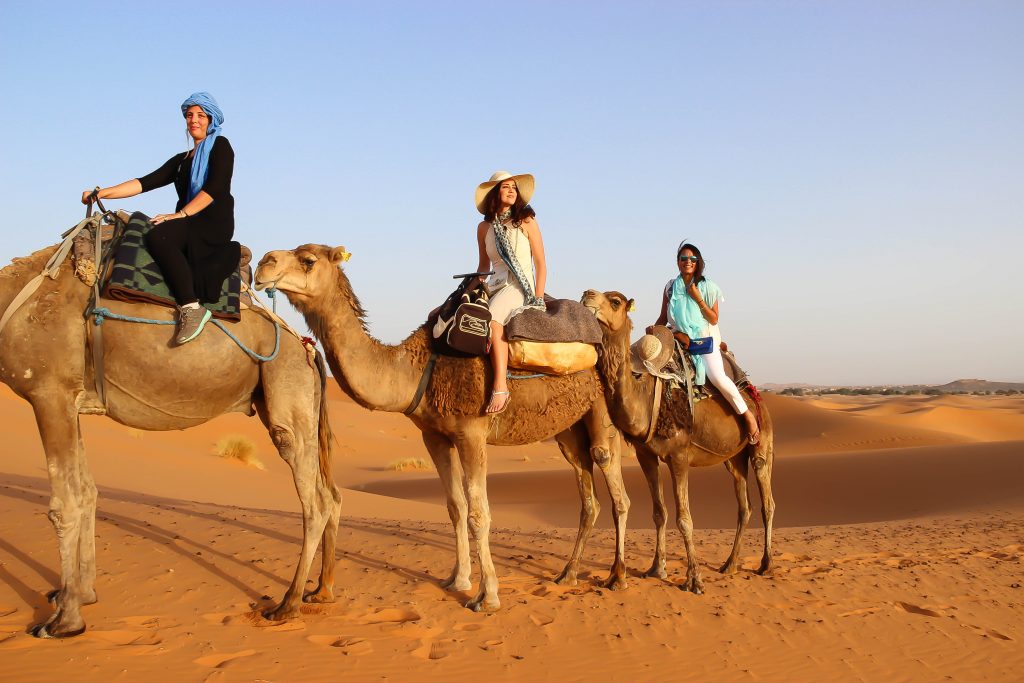 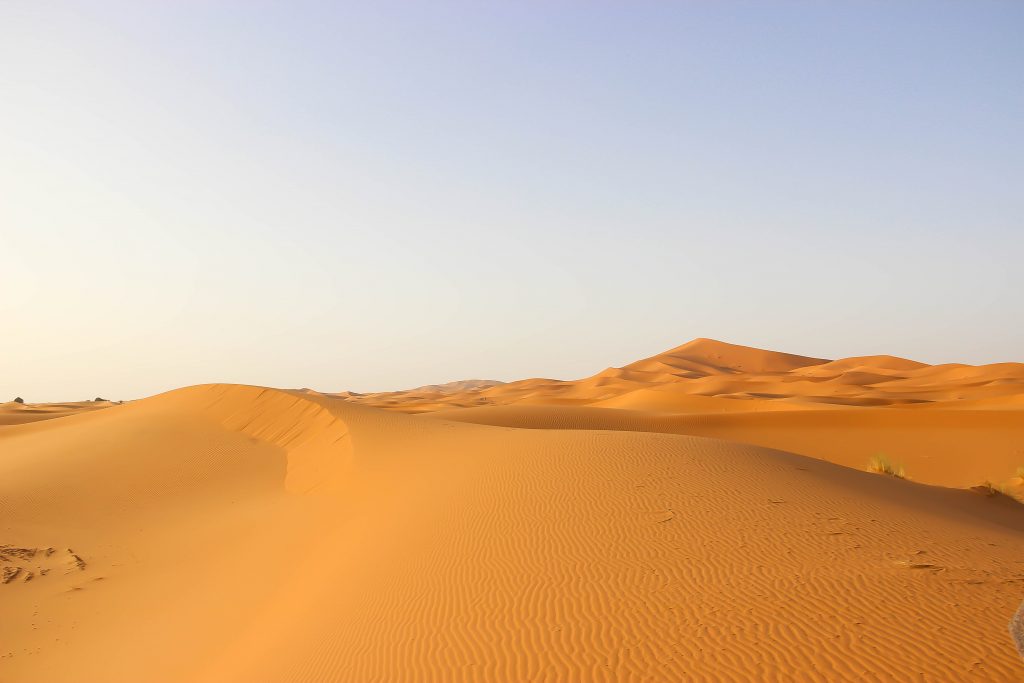 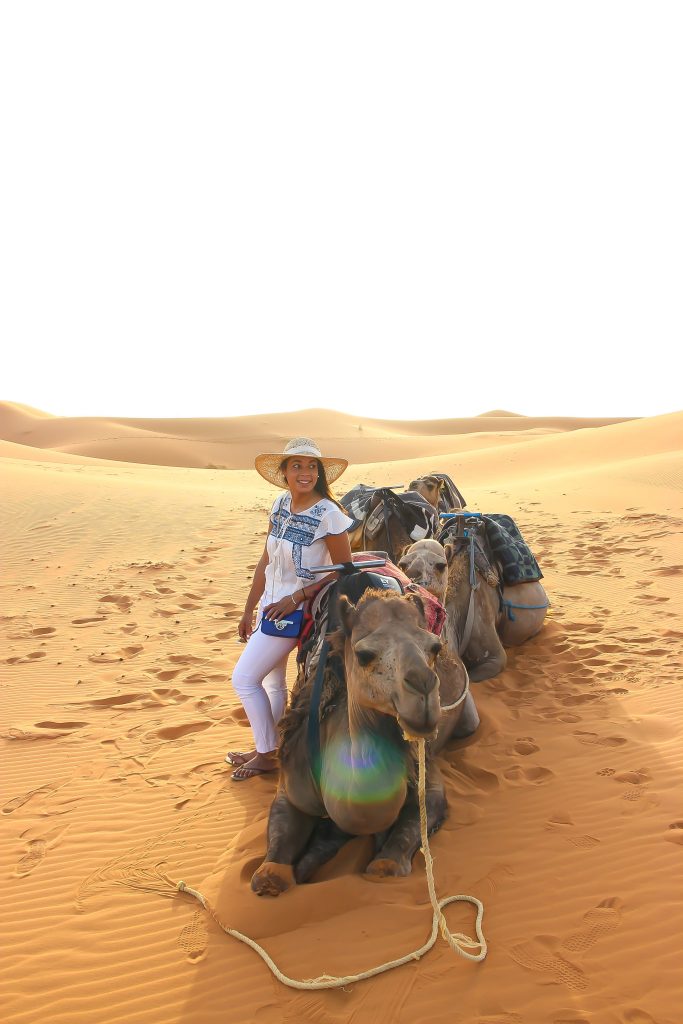 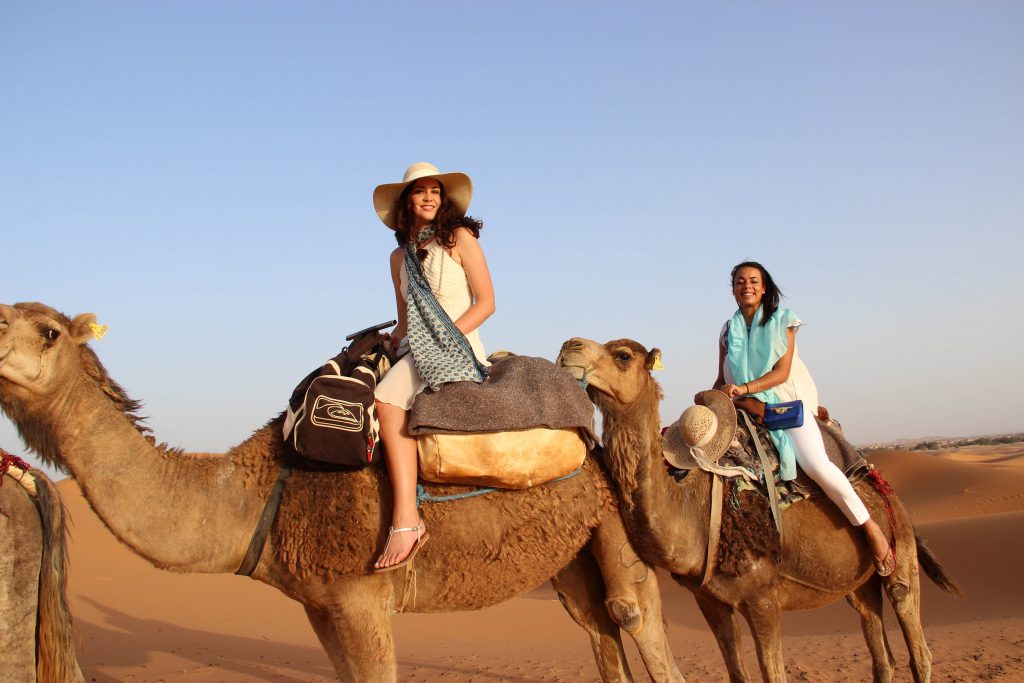 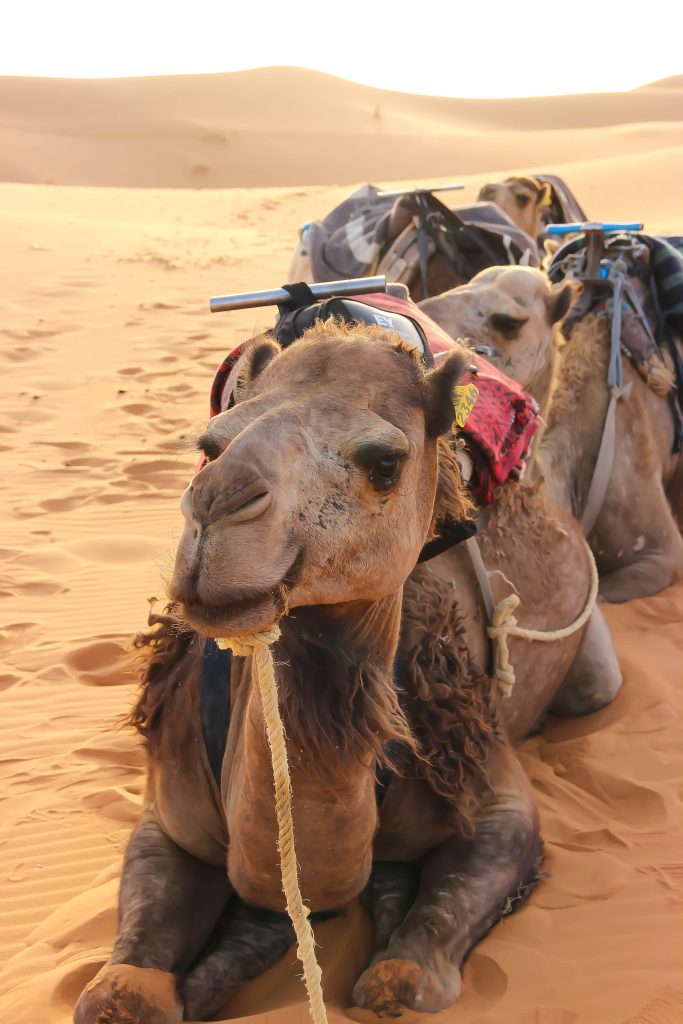 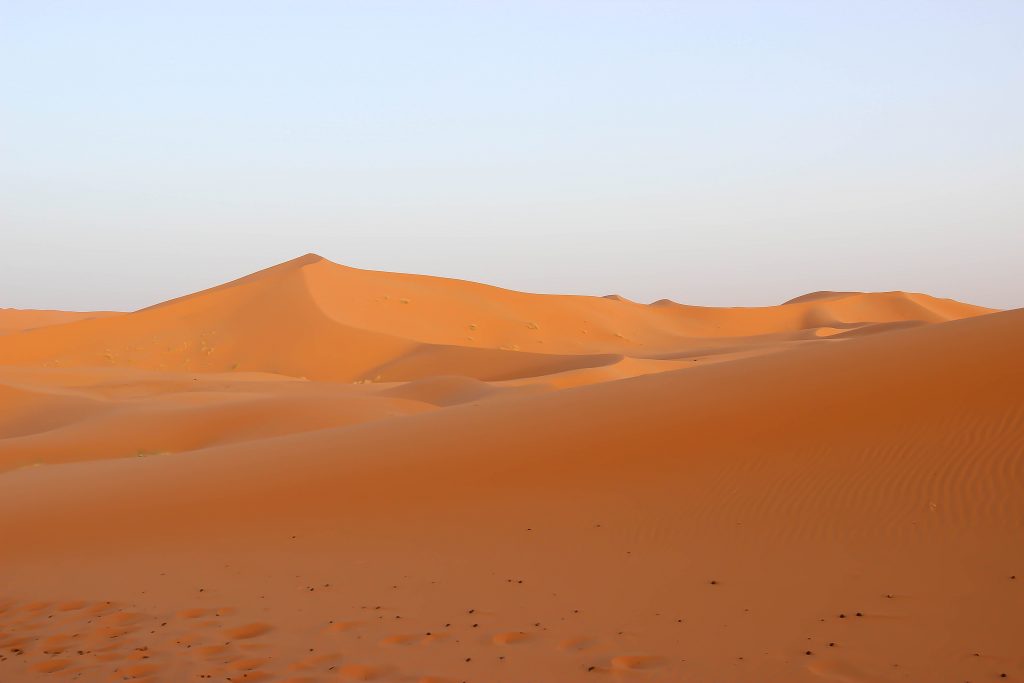 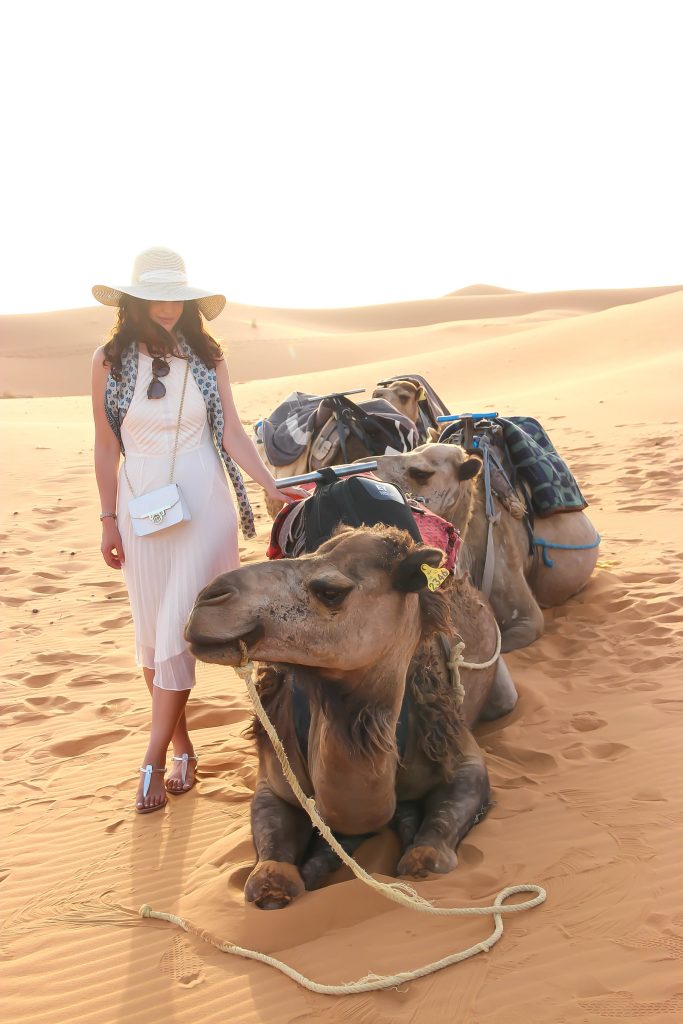 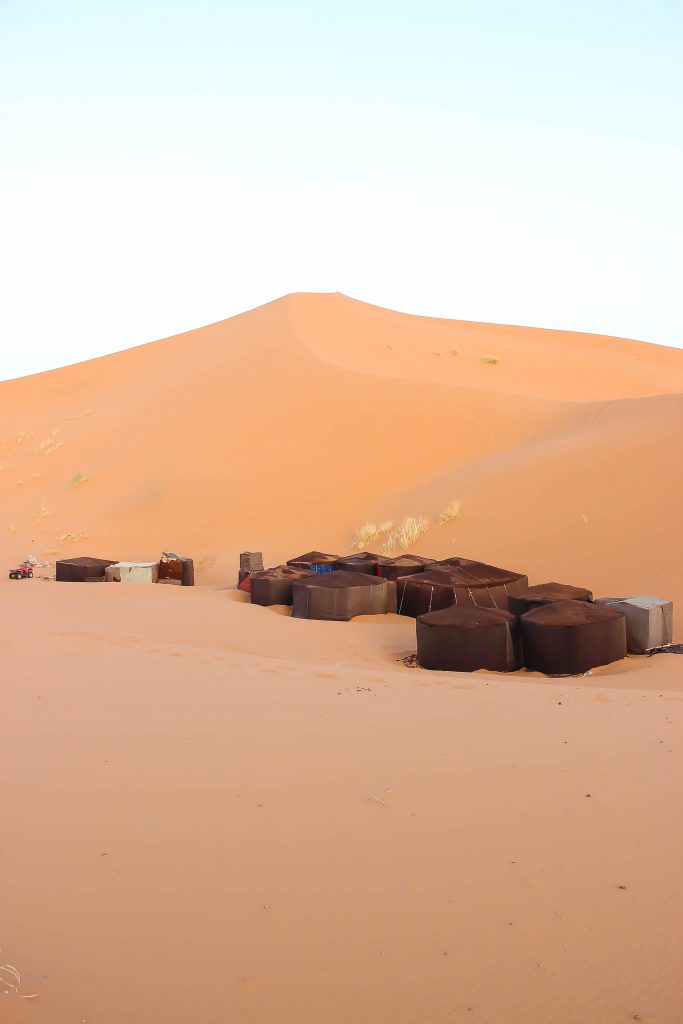 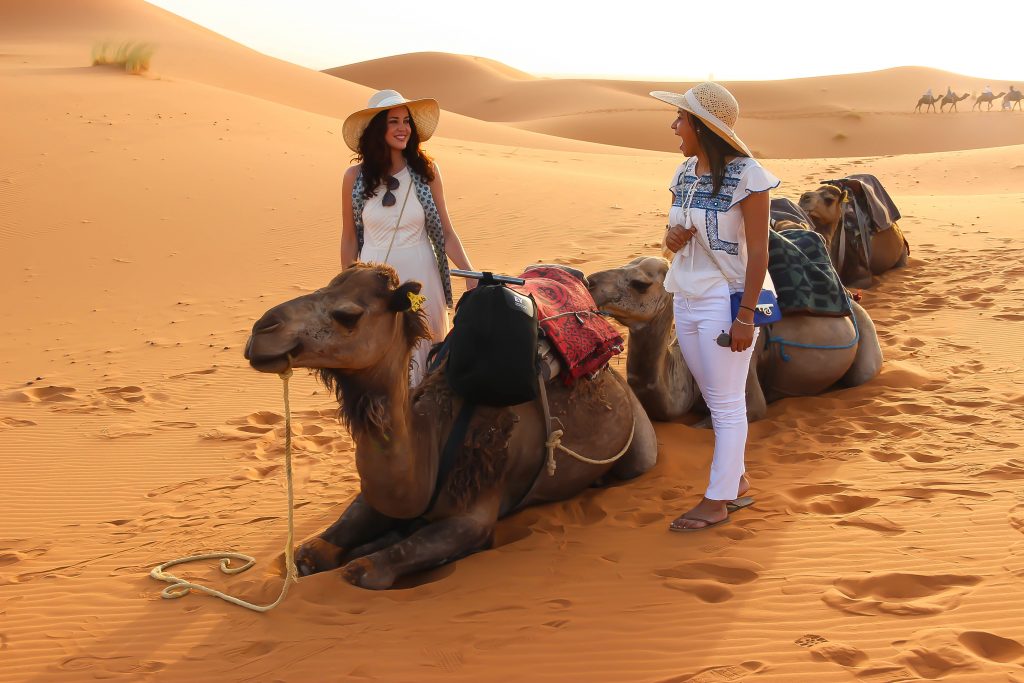 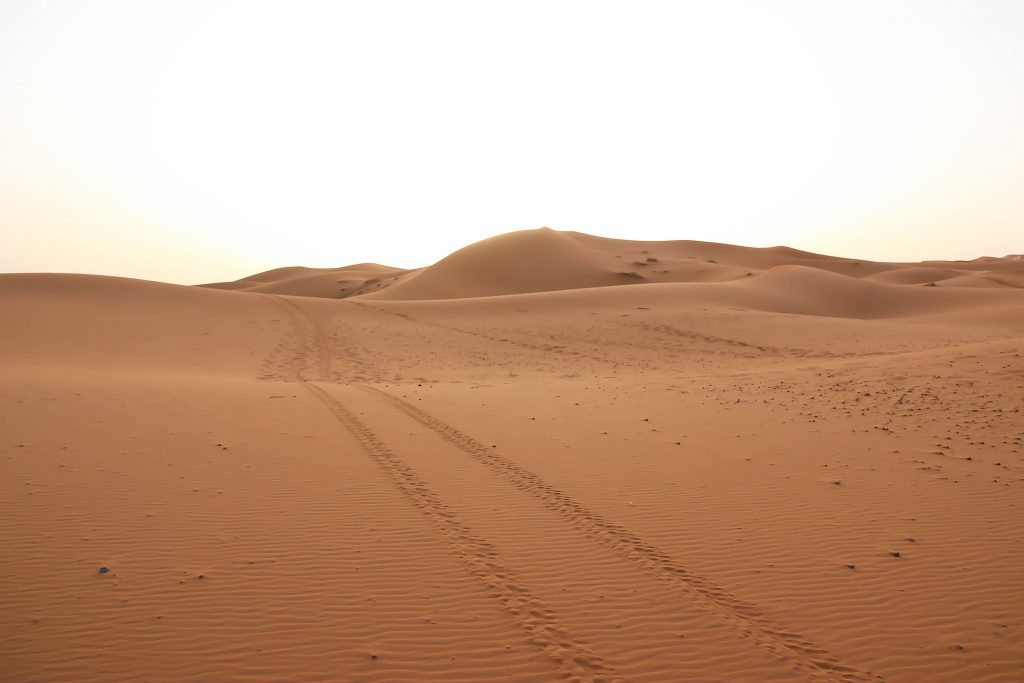 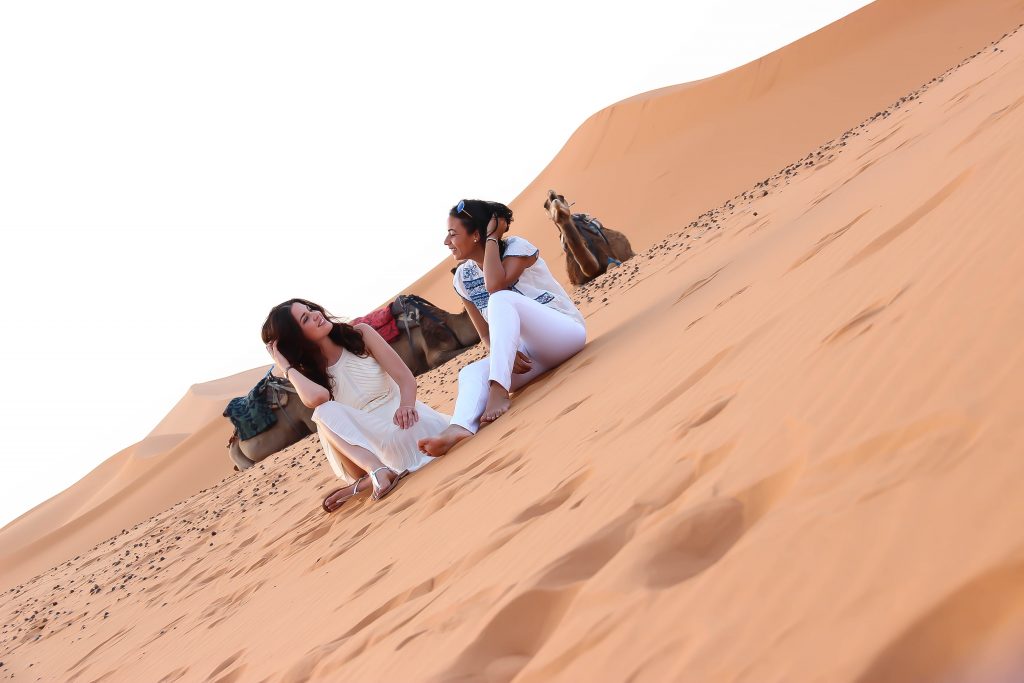 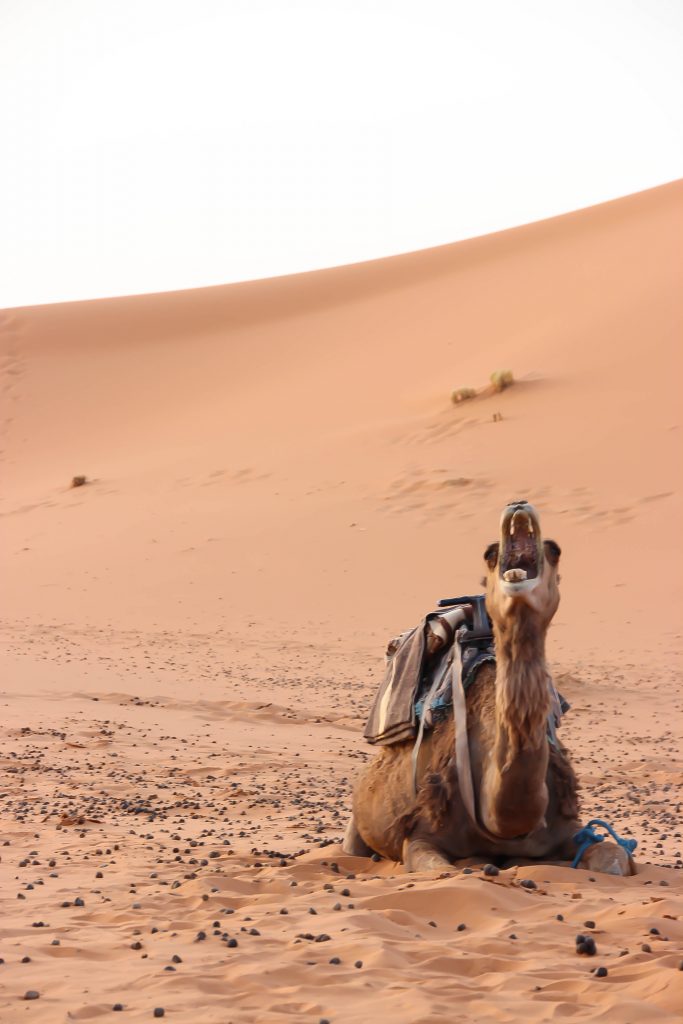 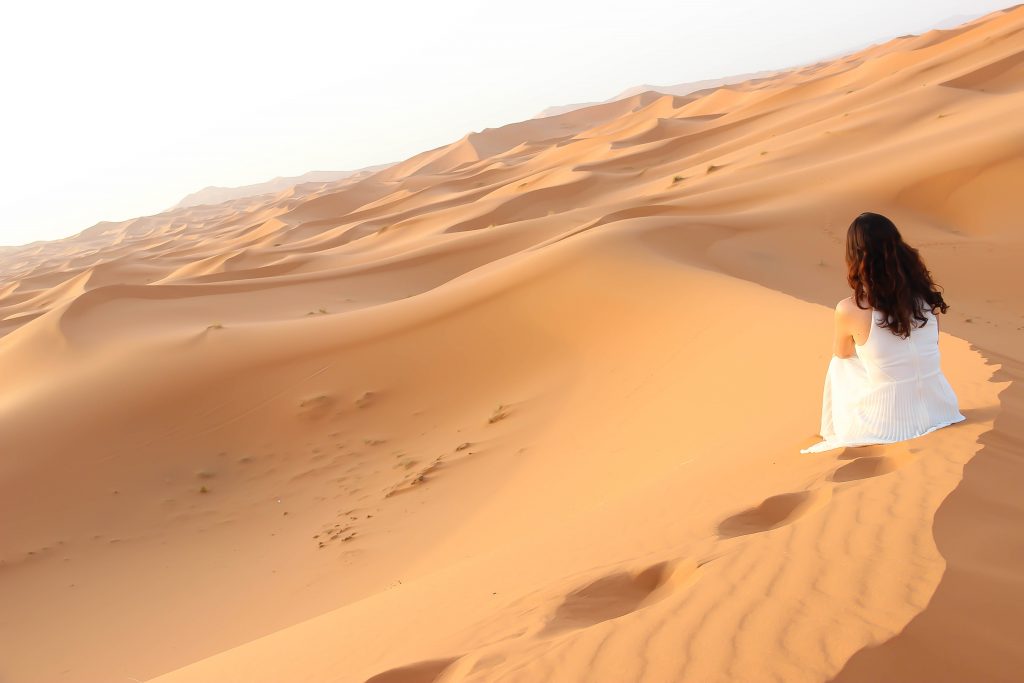 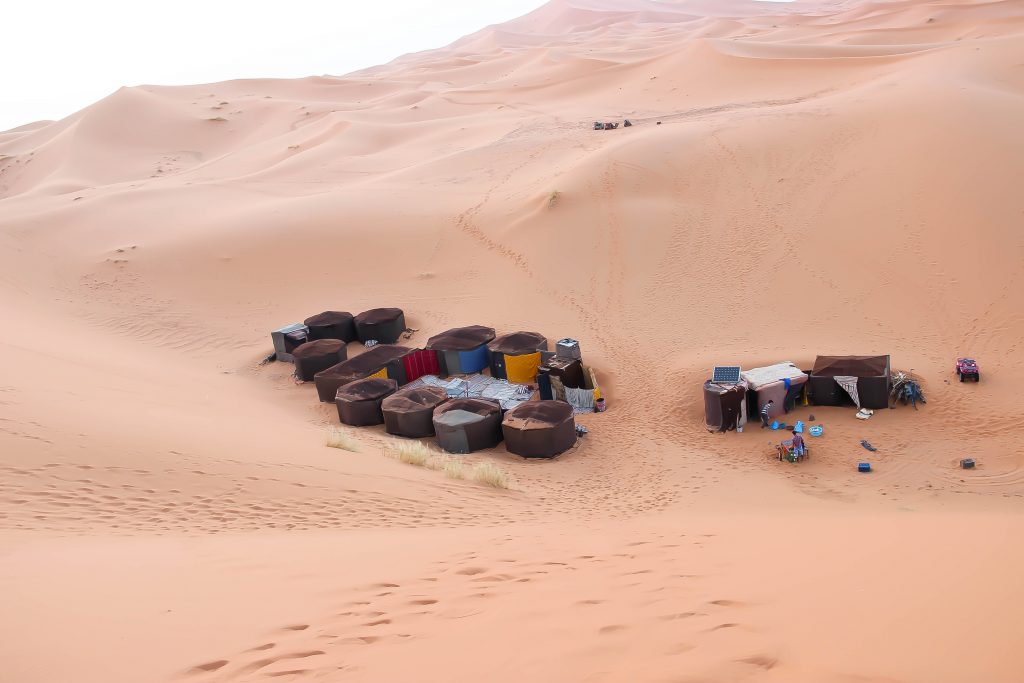 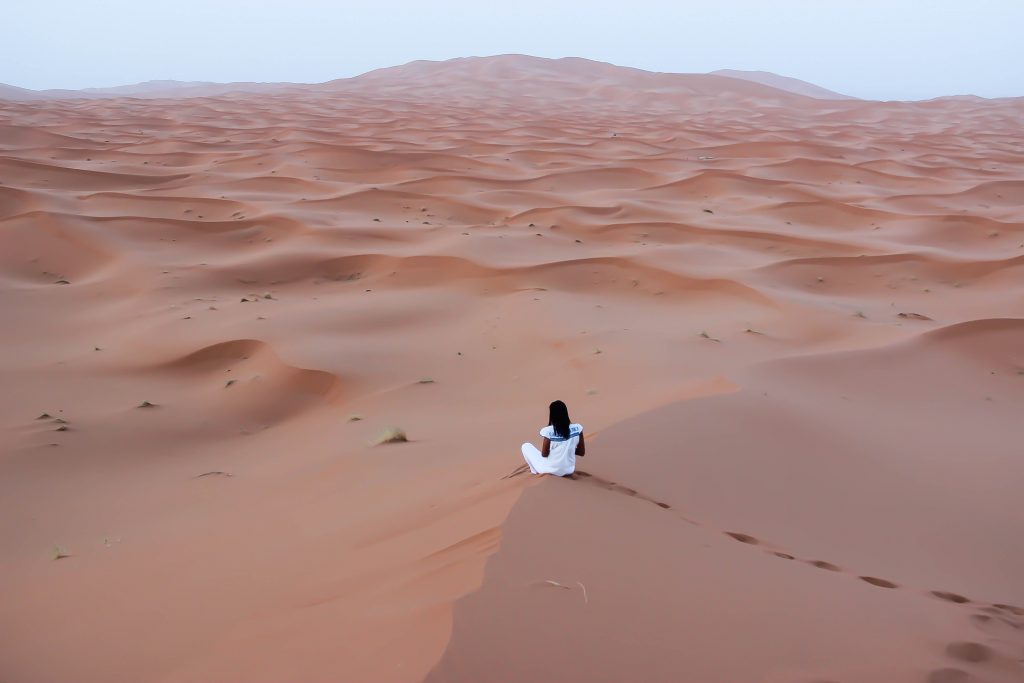 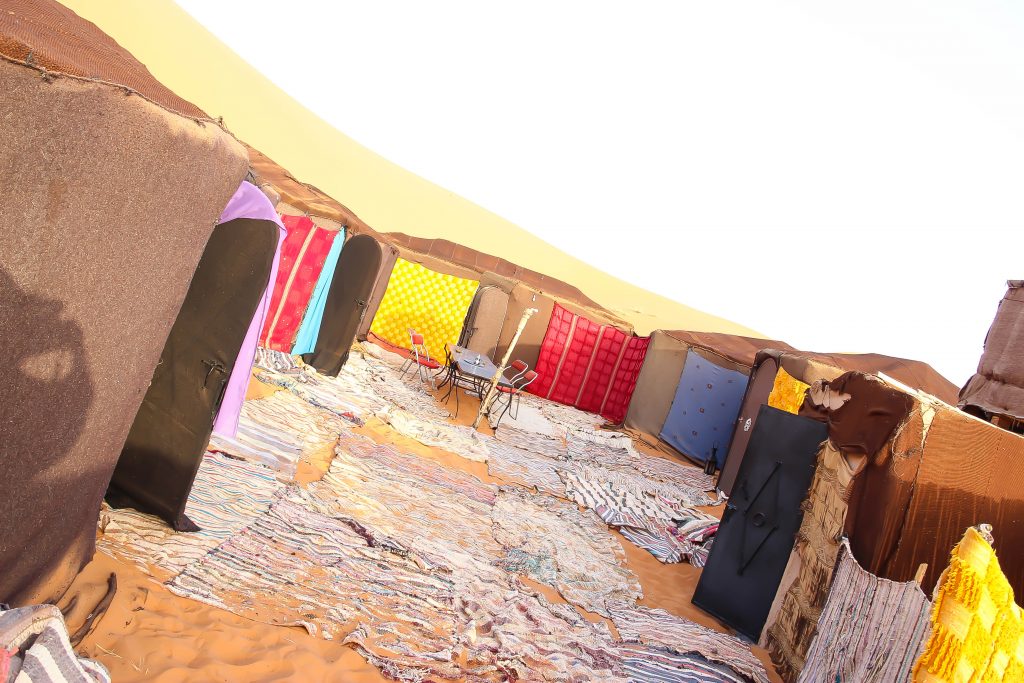 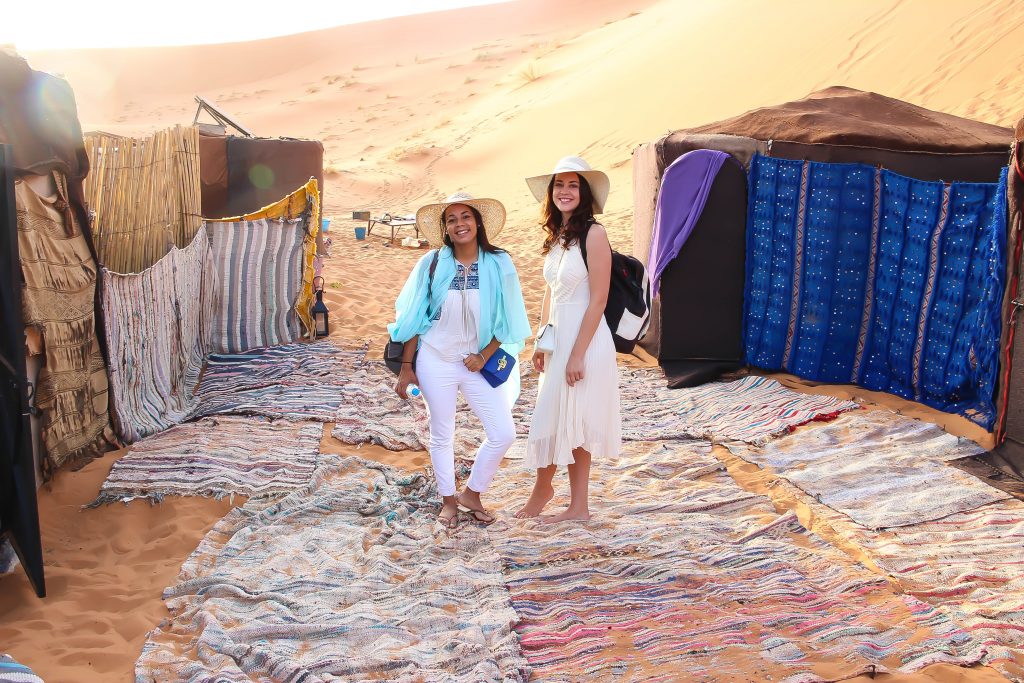 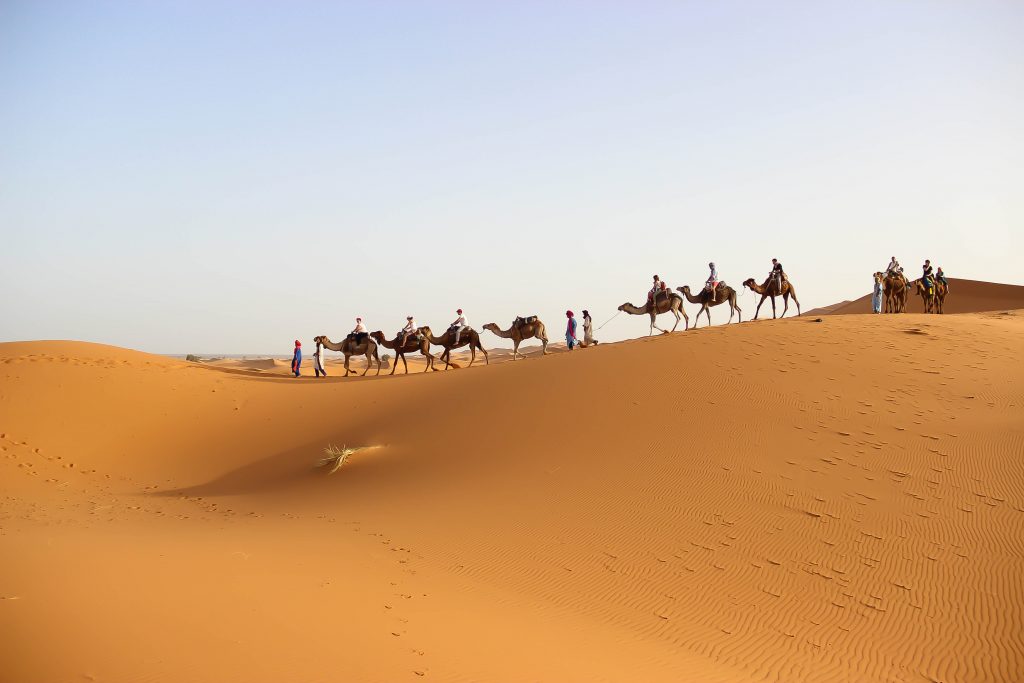 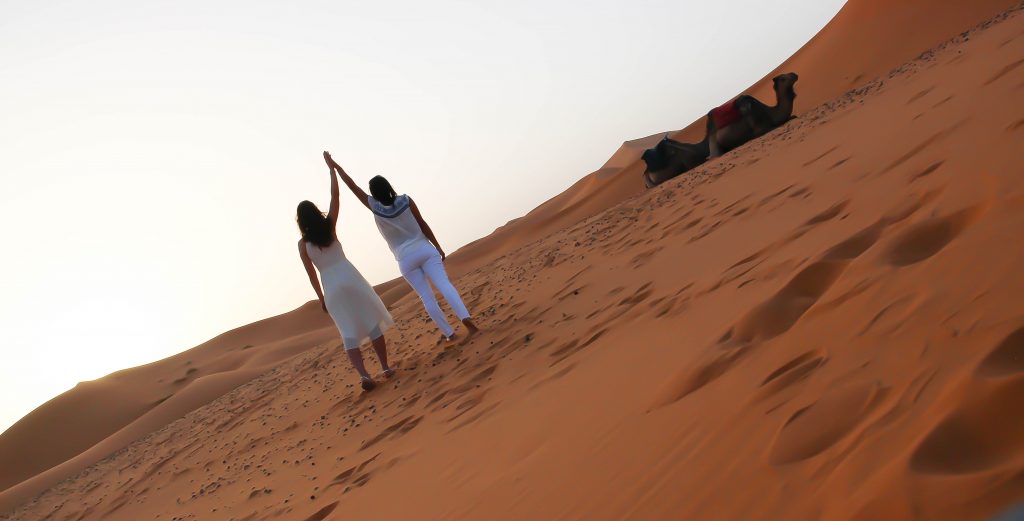